The idea of Permission Marketing isn’t new. Marketing guru, Seth Godin, popularized the idea back in the late 90’s. Since then we’ve seen the rise of the Internet and Social Media further prove that asking permission is an extremely effective way of building a relationship with your target market. Now we are in a new era of technology that takes this concept to an even more personal and lucrative level.

Smartphones are the permission marketer’s dream! Your business can literally go everywhere with your target market. Mobility might help an email campaign be more accessible, but the real opportunity is through mobile applications. Mobile Apps allow your brand and business to become personally integrated with the users daily life.

By downloading your app, you are giving the user control over the channel of communication. They can give you permission to interrupt their text message with a  reminder about their next appointment, or they’ll let you track their scans in the store to receive a discount.  The data you can collect from your users can help improve your overall marketing strategy based on their usage. 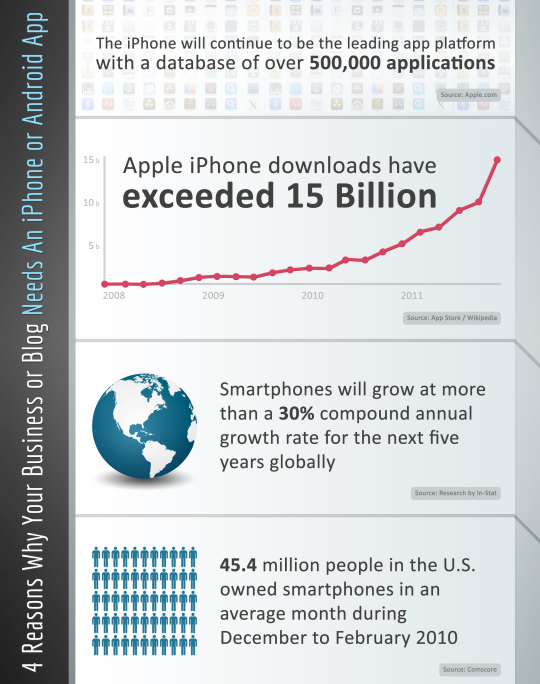 The right mobile marketing app can help these statistics strengthen your brand’s relationship with the target market.

Let us know what kind of relationship are you trying to build?

Now we have the smartphone, everyone is on their mobile device. Everyone is gone mad “mobile” and it only advances in this industry with mobile websites and mobile apps being a part of how we live.

Mobile isn’t just a channel, it’s a behavior we do every day. If you have a cell phone with mobile capabilities such as internet access and apps on your device, you interact with your phone in such a personal, immediate and constant way.  Mobility with app usage is a natural extension of your behavior. With that said, users are constantly looking for engaging experiences that provide value to their everyday life.

Here is the great thing about mobile apps, it’s widely used every day. Here are some impressive numbers to show for. By the year-end 2014 app downloads are expected to be 179 million and by 2017 those numbers will rise to over 270 million.

Here is another impressive number. Distribution of time spent on web vs. apps for 2013-2014

So the question is as a business owner or professional. “What will you do with your mobile marketing in 2015 and beyond?

Getcha Mobile is a Marketing Agency dedicated to bringing businesses and organizations to the mobile world of devices. We get you responsive, we get you traffic and engaged with your users of your products and services. @getcha_mobile

Find out how Mobile Apps Work

Ever think as a business owner or organization how you would market your business on a mobile device? Finally, you can DIY with easy access to update your mobile app on the go without paying tens of thousands of dollars to a developer.